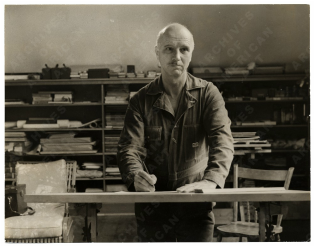 As America was plunged into the Great Depression, Artist Rockwell Kent was commissioned to illustrate a three-volume edition of Herman Melville's Moby Dick. Kent relied on his own first hand experience to render stunningly accurate illustrations that resembled those of a woodcutting.
With the help of Kent's drawings, Melville's previously obscure book became a huge commercial and artistic success. After the release of this Moby Dick set in 1930, the newly renamed Vernon Kilns, a California pottery manufacturer, was looking to move towards "art ware" type dinnerware lines as it struggled through the Depression years. Rockwell Kent was one of three famous artists Vernon Kilns hired, and Kent's "Moby Dick" line, based on the illustrations from the 1930 three-volume set launched in 1938. Vernon Kiln's Moby Dick dinnerware became the most popular of the three dinnerware lines Kent would go on to design for Vernon Kilns. In 1939, Vernon Kilns reproduced three series of designs drawn by Kent (Moby Dick, Salamina, Our America) on its sets of contemporary china dinnerware.