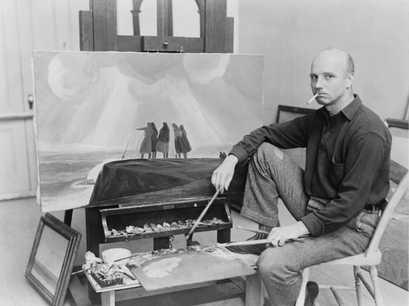 Rockwell Kent, artist, author, and political activist, had a long and varied career. During his lifetime, he worked as an architectural draftsman, illustrator, printmaker, painter, lobsterman, ship's carpenter, and dairy farmer. Born in Tarrytown Heights, New York, he lived in Maine, Newfoundland, Alaska, Greenland, and the Adirondacks and explored the waters around Tierra del Fuego in a small boat. Kent's paintings, lithographs, and woodcuts often portrayed the bleak and rugged aspects of nature; a reflection of his life in harsh climates.
Kent both wrote and illustrated several books; Wilderness: A Journal of Quiet Adventure in Alaska was published in 1920. Among his other works were Voyaging Southward from the Strait of Magellan (1924); Salamina (1934) about Greenland; and two autobiographies, This is My Own (1940) and It's me O Lord (1955).

Rockwell Kent design for Vernon Kilns, California.
According to the author of the book "The Salamina pattern was adapted from Rockwell Kent's best selling book Salamina which he wrote and illustrated".

The owner of Vernon Kilns, visited Rockwell Kent in the late 1930s at his studio in New York and convinced him that there was opportunity for him working for Vernon Kilns.  The artist was already well known for his Christmas cards, bookplates, book dust jackets, posters and advertisements.  Kent's classic Salamina, which he wrote and illustrated, served as the basis for the dinnerware patterns of the same name.

Kent's Salamina, named for his housekeeper, was the chronicle of his life from Greenland.  Rockwell Kent stated in the book that "Salamina was the most faithful, most noble, most beautiful and altogether captivating of all women of North Greenland".

The author of the book states that "this was the only Kent design that was hand-tinted and considered the most valuable of all Kent dinnerware".